The allelopathic activity of barley (Hordeum vulgare L. ssp. vulgare) root exudates was studied by comparing their effects on seedling establishment in barley itself and in two weed species, Bromus diandrus Roth. and Lolium rigidum Gaudin, using an original laboratory protocol, named ‘seed-after-seed’. In this protocol, the donor and the receiver species of water-soluble allelochemicals are grown one after the other in the same dishes, in conditions reducing resource competition between both species. Growth of all receptive species (weeds and barley) was inhibited in a dose-dependent manner, when using increasing barley seed densities (0, 8, 19 and 25 seeds per Petri dish). In our conditions, the barley varieties and landraces exhibited different allelopathic activities against weeds or barley. The allelopathic potential of the barley root exudates was also dependent on the receiver species. Indeed, the released allelochemicals proved to be more toxic against the weed plants than on barley itself. Furthermore, the toxicity of the allelochemicals increased after their release by roots, between day 0 and day 6. These allelochemicals might contribute to the plant community dynamics and their usefulness as bio-herbicides deserves further consideration. 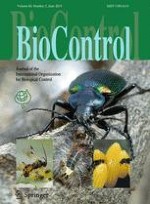 Prospects for the biological control of Drosophila suzukii

Combined application of fungal and bacterial bio-agents, together with fungicide and Mesorhizobium for integrated management of Fusarium wilt of chickpea