The usage of numerical simulation tools in rock engineering has been the undisputed state of the art for decades. Not only for rock engineering applications in the field of underground and surface stability analysis, but also for the simulation of the rock-cutting process. With increasing computing capacity and as a consequence thereof, increased capabilities of available constitutive laws, the determination of reliable input parameters is critical. The detailed characterization and implementation of stress–strain relations, including the hardening and softening regime, is a major task. While efficient guidelines and established procedures exist for compressive loading, the current state of the art for tensile loading in the majority of the cases is inadequate. Samples often fail invalidly, either due to poor preparation or due to the impact of undesired bending and torsional loading. For that reason, an innovative purely mechanical test setup is proposed in this article, which eliminates the identified confounding effects. Furthermore, an alternative procedure for the investigation of rock dilatancy under unconfined conditions is presented. Although dilatancy is normally associated with multiaxial stress states and determined by triaxial compression tests, the behaviour of unconfined rock under far field compression represents an essential load case in rock cutting, but also in the surroundings of underground openings. The proposed procedure is based on torsion tests because of their capability to generate stress states of pure shear without exhibiting axial splitting and related negative effects. With the help of numerical simulations, a reasonable range for the dilatancy can be estimated and compared to common methods of determination via unconfined compression tests. 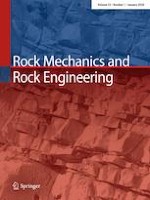 Effect of Contributing Parameters on the Behaviour of a Bolted Rock Joint Subjected to Combined Pull-and-Shear Loading: A DEM Approach