Modern engineering design optimization often relies on computer simulations to evaluate candidate designs, a scenario which formulates the problem of optimizing a computationally expensive black-box functions. In such problems, there will often exist candidate designs which cause the simulation to fail, and this can degrade the optimization effectiveness. To address this issue, this paper proposes a new optimization algorithm which incorporates classifiers into the optimization search. The classifiers predict which candidate design are expected to cause the simulation to fail, and their prediction is used to bias the search towards valid designs, namely, for which the simulation is expected to succeed. However, the effectiveness of this approach strongly depends on the type of metamodels and classifiers being used, but due to the high cost of evaluating the simulation-based objective function it may be impractical to identify by numerical experiments the most suitable types of each. Leveraging on these issues, the proposed algorithm offers two main contributions: (a) it uses ensembles of both metamodels and classifiers to benefit from a diversity of predictions of different metamodels and classifiers, and (b) to improve the search effectiveness, it continuously adapts the ensembles’ topology during the search. The performance of the proposed algorithm was evaluated using an engineering problem of airfoil shape optimization. Performance analysis of the proposed algorithm using an engineering problem of airfoil shape optimization shows that: (a) incorporating classifiers into the search was an effective approach to handle simulation failures (b) using ensembles of metamodels and classifiers, and updating their topology during the search, improved the search effectiveness in comparison to using a single metamodel and classifier, and (c) it is beneficial to update the topology of the metamodel ensemble in all problem types, and it is beneficial to update the classifier ensemble topology in problems where simulation failures are prevalent. 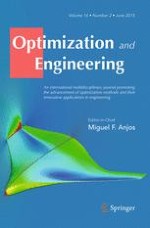