In a heterogeneous wireless environment, a variety of Radio Access Technologies (RATs) coexist. Since the number of RATs is anticipated to increase in the near future, it is desirable to have radio and network resources managed in a cooperative manner using the Common Radio Resource Management (CRRM) strategy. In order to make RAT-specific radio resources manageable in CRRM, this paper proposes the Analytical Hierarchy Process (AHP) based resource management scheme that efficiently allocates resources among heterogeneous wireless networks. The proposed AHP-based method is simple and flexible enough to be used in any network environment and can consider a multitude of decision factors. In addition, the proposed scheme uses a radio bandwidth model, which properly reflects transmission rates under given channel conditions, as the actual radio resources to be allocated. The model considers the AMC (Adaptive Modulation and Coding) scheme that is widely used in current broadband wireless access technologies, and thus, packet service characteristics, such as response time, can be analyzed. This is in contrast to existing work that focuses only on circuit service characteristics (e.g., blocking probability). The effectiveness and flexibility of the proposed method are demonstrated by implementing a number of existing methods and performing extensive simulation study on several different scenarios. 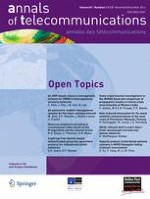 An autonomic mobility management solution for the future wireless Internet