In many applications of wireless sensor network, the position of the sensor node is useful to identify the actuating response of the environment. The main idea of the proposed localization scheme is similar with most of the existing localization schemes, where a mobile beacon with global positioning system broadcast its current location coordinate periodically. The received information of the coordinates help other unknown nodes to localize themselves. In this paper, we proposed a localization scheme using mobile beacon points based on analytical geometry. Sensor node initially choose two distant beacon points, in-order to minimize its residence area. Later using the residence area, sensor node approximate the radius and half length of the chord with reference to one of the distant beacon point. Then the radius and half length of the chord are used to estimate the sagitta of an arc. Later, sensor node estimate its position using radius, half length of the chord, and sagitta of an arc. Simulation result shows the performance evaluation of our proposed scheme on various trajectories of mobile beacon such as CIRCLE, SPIRAL, S-CURVE, and HILBERT. 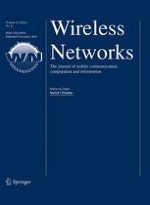