The pressuremeter test is one of the borehole loading tests that determines the deformation characteristics of subsurface soil. The main idea of the pressuremeter test is to inflate the cylindrical hole drilled in order to measure the pressure-deformation relations of the soil. Another in situ test by which soil properties are determined is the well-known standard penetration test (SPT). The consistency and firmness of soils can be determined using the test results of these in situ tests. In order to determine the relationship between the results of these two tests in clayey soils with low and high plasticity characteristics, a total of 20 boreholes with 1.5–4.5 m depths were drilled, and both tests were performed at varying depths. Following the pressuremeter test, pure limit pressure (P L) values and pressuremeter deformation modulus (E M) were calculated for 31 different levels, respectively. These values were compared to SPT (N 60) values, and high determination coefficients (R 2) were attained. Therefore, for clayey soils, it is possible to determine E M and P L values from SPT results, and consequently SPT test results can be used to calculate settlement and bearing capacity as well as the undrained shear strength values (c u) of low and high plasticity clayey soils.

Titel
An approach for determining the relationship between the parameters of pressuremeter and SPT in different consistency clays in Eastern Turkey
Autoren:
Ali Özvan
İsmail Akkaya
Mücip Tapan 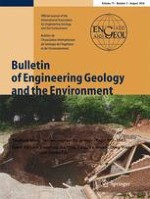 Site response analysis for the seismic improvement of a historical and monumental building: the case study of Augusta Hangar