Vulnerability data sources are used by academics to build models, and by industry and government to assess compliance. Errors in such data sources therefore not only are threats to validity in scientific studies, but also might cause organizations, which rely on retro versions of software, to lose compliance. In this work, we propose an automated method to determine the code evidence for the presence of vulnerabilities in retro software versions. The method scans the code base of each retro version of software for the code evidence to determine whether a retro version is vulnerable or not. It identifies the lines of code that were changed to fix vulnerabilities. If an earlier version contains these deleted lines, it is highly likely that this version is vulnerable. To show the scalability of the method we performed a large scale experiments on Chrome and Firefox (spanning 7,236 vulnerable files and approximately 9,800 vulnerabilities) on the National Vulnerability Database (NVD). The elimination of spurious vulnerability claims (e.g. entries to a vulnerability database such as NVD) found by our method may change the conclusions of studies on the prevalence of foundational vulnerabilities. 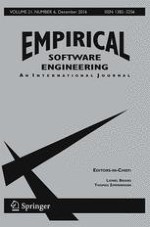 On the use of many quality attributes for software refactoring: a many-objective search-based software engineering approach

Improving the performance of OCL constraint solving with novel heuristics for logical operations: a search-based approach

On the unreliability of bug severity data