The paper is concerned with eigen buckling analysis of curvilinear shells with and without cutouts by an effective meshfree method. In particular, shallow shell, cylinder and perforated cylinder buckling problems are considered. A Galerkin meshfree reproducing kernel (RK) approach is then developed. The present meshfree curvilinear shell model is based on Reissner-Mindlin plate formulation, which allows the transverse shear deformation of the curved shells. There are five degrees of freedom per node (i.e., three displacements and two rotations). In this setting, the meshfree interpolation functions are derived from the RK. A singular kernel is introduced to impose the essential boundary conditions because of the RK shape functions, which do not automatically possess the Kronecker delta property. The stiffness matrix is derived using the stabilized conforming nodal integration technique. A convected coordinate system is introduced into the formulation to deal with the curvilinear surface. More importantly, the RKs taken here are used not only for the interpolation of the curved geometry, but also for the approximation of field variables. Several numerical examples with shallow shells and full cylinder models are considered, and the critical buckling loads and their buckling mode shapes are calculated by the meshfree eigenvalue analysis and examined. To show the accuracy and performance of the developed meshfree method, the computed critical buckling loads and mode shapes are compared with reference solutions based on boundary domain element, finite element and analytical methods. 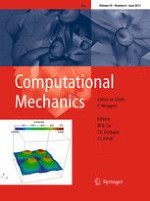 Geometric constraints for shape and topology optimization in architectural design