In the proposed work introduced a pose-invariant face recognition process for the videos so as todiminish the calculation intricacy of the traditional technique. The intended approach includes four phases, namely (i) preprocessing, (ii) object detection, (iii) feature extraction along with (iv) dimensionality reduction. The initial phase is segmenting the database video clips into the frames where the preprocessing is done using an adaptive median filtering such that to eradicate the noise. The subsequent phase is detecting the preprocessed image through the viola–jones technique. With this technique, the mouth, left eye, face, nose, right eye were identified. After that, the training image attributes like the texture, edge, and wavelet are extorted with the assistance of dissimilar feature extortion approaches. The extorted attributes will then be inputted to the PCA approach. The similar process is replicated for query images. At last, perform the similarity measurement amid the trained database images and query images such that to attain the distinguished image. In addition, the genuine general performance assesses of the projected technique is assessed with that of the traditional ICA and also LDA techniques. 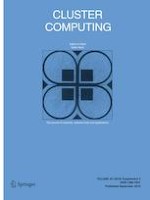 Enhanced approach for wireless sensor network based on localization, time synchronization and quality of service routing