» Jetzt Zugang zum Volltext erhalten
Wichtige Hinweise
Communicated by Prof. Ketil Stølen.
The authors would like to acknowledge the support provided by the Deanship of Scientific Research at King Fahd University of Petroleum & Minerals (KFUPM) for funding this work through Project No. IN111017.

One significant problem requirements engineers have to cope with is the management of unclear requirements, ambiguities, and conflicts that may arise between stakeholders. Such issues may be desirable since they may allow for further elicitation of requirements that would have been missed otherwise. Goal models capture the objectives and other intentions of different stakeholders, together with their relationships. They can be used to refine unclear requirements and to detect conflicts and ambiguities early during model validation. However, resolving such ambiguities and conflicts is key for the successful implementation of the goal models. In this paper, we propose a novel approach to validate models in the Goal-oriented Requirement Language and resolve conflicts between the perspectives of intervening stakeholders (and especially between stakeholders of a given group). Our approach is based on a statistical analysis of empirical data that we collect from surveys designed for each group of stakeholders. We apply concept analysis in order to fix goal-model artifacts that are subject to conflict. We illustrate our approach using a case study of a goal model describing the involvement of undergraduate students in university research activities. 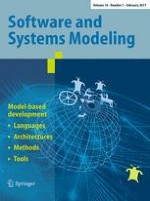 Analysing the cognitive effectiveness of the WebML visual notation

Variability testing in the wild: the Drupal case study

Erratum to: Introduction to the theme issue on variability modeling of software-intensive systems