When people interact with socially interactive robots on a regular basis, it could be that people start developing some kind of relationship with such robots. People are able to get attached to several objects in our everyday world. However, the relationships we build with regular objects differ significantly from those we may build with socially interactive robots. In contrast to common nonhuman objects, socially interactive robots act autonomously, which increases people’s expectations about its capacities. Moreover, human–robot interactions are constructed according to the rules of human–human interaction, inviting users to interact socially with robots. This paper fosters a discussion on the ethical considerations of human–robot relationships and discusses whether these bonds between humans and robots could contribute to the good life. Research on people’s interactions with and social reactions towards socially interactive robots is necessary to shape the ethical, societal and legal perspectives on these issues, and facilitates the design of responsible robotics and the successful introduction of robots into our society. 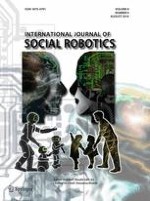 Hygiene and the Use of Robotic Animals in Hospitals: A Review of the Literature

Social and Assistive Robotics in Dementia Care: Ethical Recommendations for Research and Practice