The path planning of an autonomous surface vehicle in a lake for environmental monitoring has been modeled as a constrained case of the traveling salesman problem, in which the vehicle should visit a ring of beacons deployed at the shore of the lake for data exchange. The problem is solved using a genetic algorithm. The algorithm searches for the maximization of the area covered by the vehicle. Three types of fitness functions are studied related to each of the following cases: the unconstrained case, the constrained case with death penalty and the constrained case with a penalty factor. Moreover, the proposed approach is compared with other algorithms, such as brute force algorithms, the randomized algorithm and the greedy algorithm. The results show that genetic algorithm outperforms the other approaches by 15 and 3%, respectively. 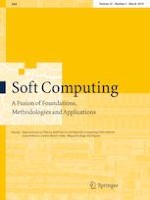