Wireless mesh networks have emerged as a viable means of communicating between points that are not within wireless range of each other. There are still, however, a number of challenges involved in designing and implementing such wireless multi-hop networks, particularly with respect to optimising the user throughput. This paper presents some preliminary measurements from an experimental multi-hop wireless networking testbed that has been set up using nodes which utilise Chirp Spread Spectrum (CSS) technology. Multi-hop networks with linear topologies and a maximum of 5 static nodes have been considered. Numerous experiments, mostly indoors, have been performed in which parameters such as the network chain length, the packet size, the logical transmit channel and the transmit power of each node have been varied. The performance of a system with two parallel multi-hop chains was also investigated in which the chains operate simultaneously on either the same or different channels. The end-to-end throughput is observed to fall with increasing chain lengths, typically stabilising for longer chains at values approximately equal to 5–15 % of the single-hop throughput. As the size of the payload is increased, a corresponding linear increase in the throughput is observed. The user throughput also increases with increasing transmit powers at each of the nodes in the chain. However, a trade-off must be made if power and throughput are to be optimised simultaneously. 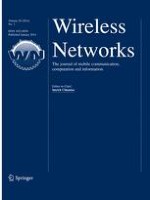