Based on the geometric analysis of the relationship between the stress state at a point and the yield surface defined in the principal stress space, a coefficient ω is set up as an estimation index to describe the stress-induced yield risk. After yield, the equivalent plastic shear strains is usually used to characterize the failure degree (FD) of the material and adopted here as an index of the damage degree for the surrounding rock masses. Then, a unified variable combining ω and FD, named failure approaching index (FAI), is constructed to estimate the stability of rock mass which may be at different deformation stages. The formulas of FAI are derived for some popular yield criteria in geomechanics. Details for such development are addressed in the paper. Its rationality is verified by numerical simulation and comparative analysis of the conventional triaxial compression tests and typical tunnel projects. In addition, the method for applying FAI to the stability estimation of surrounding rock mass is proposed. As examples, the stability of the underground powerhouse, access tunnels and headrace tunnels at the Jinping II hydropower station are estimated by making use of the method we presented. The results indicate that not only is the index rational in mechanics, but the theory also has good expansibility, and the estimation methods are simple and practical as well. It is easier for field engineers to analyze and understand the numerical results. 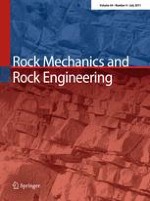