Several studies in the field of human–computer interaction have focused on the importance of emotional factors related to the interaction of humans with computer systems. According to the knowledge of the users’ emotions, intelligent software can be developed for interacting and even influencing users. However, such a scenario is still a challenge in the field of human–computer interaction. This article endeavors to enhance intelligence in such types of systems by adopting an ensemble-based model that is able to identify and classify emotions. We developed a system (music player) that can be used as a mechanism to interact and/or persuade someone to “change” his/her current emotional state. In order to do this, we also designed a generic model that accepts any kind of interaction or persuasion mechanism (e.g., preferred YouTube channel videos, games, etc.) to be deployed at runtime based on the needs of each user. We showed that the approach based on a genetic algorithm for the weight assignment of the ensemble achieved an accuracy average of 80%. Moreover, the results showed a 60% increase in the level of user’s satisfaction regarding the interaction with users’ emotions. 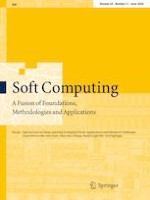 A network representation method based on edge information extraction