Node localization technology is one of the most important technologies in wireless sensor networks. Due to the advantages of saving and convenience, received signal strength indication (RSSI) technology is widely taken to measure the distance between the sensor nodes, and then trilateral localization algorithm which is one of the classic algorithms can calculate the position result quickly. However, the result always comes with an irregularly wide error. Environment, temperature and electromagnetism are generally considered the interference factors, which have been widely researched. From another angle, this study focuses on the error of the algorithm itself, and discusses the stability of equations. A trilateral localization algorithm for outliers suppression is proposed. Through a large number of simulation, it is demonstrated that the proposed algorithm has a good performance than classic trilateral algorithm based-on the nearest three anchor nodes. A significant meaning of this research is that the deepest source of gross errors has been found when we use classic trilateral algorithm. 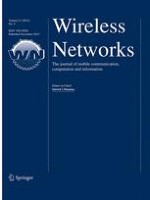 An efficient adaptive method for estimating the distance between mobile sensors