Analysis of mechanical behavior in a pipe roof during excavation of a shallow bias tunnel in loose deposits | springerprofessional.de Skip to main content
TOOLBAR 1 2 3 4
SUCHE MENÜ 1 2 3 4

This paper presents a study on the mechanical behavior in a long pipe roof during excavation of a shallow bias highway tunnel in loose deposits. The mechanical parameters of the surrounding soil were obtained by triaxial consolidated-drained shear tests on large reconstituted specimens. Three-dimensional numerical modeling was conducted to simulate the tunnel construction process. Six typical construction stages were simulated to analyze the effects of tunnel support elements, topographic and geological conditions on the mechanical behavior of the pipe roof. The modeling results revealed the variation of force and bending moment distribution in the pipe roof during excavation. Three main conclusions were drawn: (1) for the shallow and asymmetrically loaded tunnel buried in loose deposits, a pipe roof at the entrance can effectively reduce the stresses and asymmetric loading between the tunnel support elements and enhance the tunnel safety during construction; (2) because of asymmetrical stresses, the umbrella arch could shoulder much of the axial force of the pipe roof and the protection arch could reduce the force on the pipe roof effectively; (3) influenced by the asymmetric topography, the maximum force and bending moment in the pipe roof occurred mainly in the upper right tunnel heading. As the stiffness of the retaining wall, protection arch, umbrella arch, and the surrounding loose deposits were different, the force and bending moment distribution in the pipe roof was highly non-uniform during excavation. The simulation results should be significant both for the pipe roof design and the construction of other tunnels in similar geologic conditions. 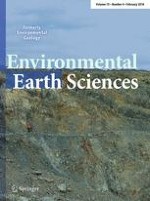