In this study, we wanted to discriminate between two groups of people. The database used in this study contains 20 patients with Parkinson’s disease (PD) and 20 healthy people. Three types of sustained vowels (/a/, /o/ and /u/) were recorded from each participant and then the analyses were done on these voice samples. The technique used in this study is to extract voiceprint from each voice samples by using mel frequency cepstral coefficients (MFCCs). The extracted MFCC were compressed by calculating their average value in order to extract the voiceprint from each voice recording. Subsequently, a classification method was performed using leave one subject out (LOSO) validation scheme along with support vector machines (SVMs). We also used an independent test to validate our results by using another database which contains 28 PD patients. Based on the research result, the best obtained classification accuracy using LOSO on the first dataset was 82.50 % using MLP kernel of SVM on sustained vowel /u/. And the maximum classification accuracy using the independent test was 100 % using sustained vowel /a/ with polynomial kernel of the SVM and with MLP kernel of the SVM. This result was also achieved using sustained vowel /o/ with polynomial kernel of the SVM. 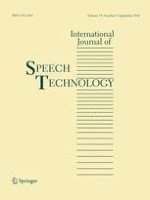 Speech transmission with COFDM based on different discrete transforms