The mechanical properties of biological cells are known as effective label-free biomarkers in many cell physiological events. Several techniques have been proposed to manipulate, measure, and analyze cell mechanical properties, including micropipette aspiration, atomic force microscopy, optical tweezers, and magnetic tweezers. However, most of these methods have inherent problems in practice, including high equipment cost, complex operation, low accuracy, and low throughput. This paper presents a new method for the mechanical characterization of red blood cells (RBCs) on the basis of a dielectrophoresis (DEP) microfluidic system integrated with newly designed parallel ladder electrodes. The proposed microfluidic system not only can stretch RBCs in single-cell level exactly but also has the advantages of high efficiency and throughput. The DEP force generated by the ITO electrodes was theoretically studied, and a series of experiments were performed to stretch RBCs. The relationship between the DEP force and the strain of the RBCs was analyzed, which elucidated the elongation process of RBC under the domination of DEP force, as well as the maximum elongation ability of RBCs. These quantitative results are helpful for people to understand the characteristics of RBCs. 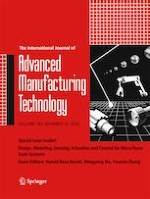 Design and control of a piezoactuated microfeed mechanism for cell injection