A rockburst is defined as damage to an excavation in a sudden or violent manner, frequently occurring during the excavation of civil engineering tunnels and deep-level mining. Small-scale structural planes in the vicinity of tunnels have been found to play an important role in controlling certain rockbursts in the deeply buried tunnels of the Jinping-II Hydropower Station. In order to study the mechanisms of bursts related to the structural plane, four typical examples were selected to illustrate the temporal and spatial characteristics of the burst and the exposed plane. Three types of rockbursts were classified based on these examples and on a preliminary analysis of the various mechanisms—namely, fault-slip burst, shear rupture burst, and buckling burst. Model experiments using cement mortar revealed three failure mechanisms of the structural plane under shear stress: slip dislocation of the asperities, tensile failure of the footwall and hanging wall initiated from the root of the asperities, and impact fracture of the front end of the hanging wall and back end of the footwall. These mechanisms are used to explain the development processes of fault-slip and shear rupture bursts. Analysis of the source mechanisms of buckling bursts caused by structural planes is also provided, and three proposed source mechanisms are put forth to illustrate the factors that may have triggered the buckling bursts: self-adjustment and accumulation, disturbance from machine or blasting excavation, and energy input from remote seismic sources. Issues that must be addressed in the future are outlined and discussed in the final section. The research results contribute to a mechanistic understanding of and control method for structure-type rockbursts in deep hard-rock tunnels. 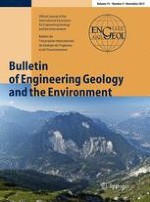 The mineralogy and fabric of ‘Brickearths’ in Kent, UK and their relationship to engineering behaviour

Landslide susceptibility analysis in data-scarce regions: the case of Kyrgyzstan

Effect of wastewater on building foundation in karst travertine areas in Antalya, Turkey

Influence of wet–dry, freeze–thaw, and heat–cool cycles on the physical and mechanical properties of Upper Red sandstones in central Iran