The statistical behaviour and modelling of the sub-grid variance of reaction progress variable have been analysed based on a priori analysis of direct numerical simulation (DNS) data of turbulent premixed Bunsen burner flames at different pressure levels. An algebraic expression for sub-grid variance, which can be derived based on a presumed bi-modal sub-grid distribution of reaction progress variable with impulses at unburned reactants and fully burned products, has been found to be inadequate for the purpose of prediction of sub-grid variance even for the flames in the wrinkled flamelets/corrugated flamelets regime. Moreover, an algebraic model, which is often used for modelling sub-grid variance of passive scalars, has been found to significantly overpredict the sub-grid variance of reaction progress variable for all the cases considered here. The modelling of the unclosed terms of the sub-grid variance transport equation has been analysed in detail. Suitable model expressions have been identified for the sub-grid flux of variance, reaction rate contribution and scalar dissipation rate based on a priori analysis of DNS data. It has been found that the alternation of pressure does not have any significant impact on the closures of sub-grid flux of variance but a model parameter for the Favre-filtered scalar dissipation rate needs to be modified to account for the variation of pressure. 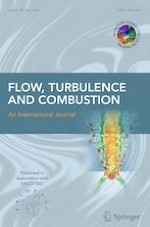 Aerodynamic Effects as a Maglev Train Passes Through a Noise Barrier