Two of the most popular weathering tests used for dimension stone are EN 12371 freeze–thaw (FT) and EN 12370 Salt Crystallization (SC). These tests are used to assign a durability value to the rocks. Both tests are based on the cyclical growth of crystals in the porous system of the rock, which causes structural stress on the rock matrix that may affect its integrity. The weathering mechanism is the same in both tests although the rate of volume increase is higher for the salt crystals. Due to this similarity, the two tests provide complementary information. The EN (European Norms) recommend evaluating the results together, but do not establish correlations between the results of these two tests for different types of rocks. Knowing these relationships would improve the understanding of the results and the response to weathering of the rock once placed in a building. In this work, several ornamental rocks (sandstones, limestones, dolostones, and a travertine) from the Iberian Peninsula were submitted to FT and SC tests. Rocks were mineralogically and petrographically characterized, and their porous systems were defined by a combination of techniques (scanning electronic microscopy, digital images analysis, and mercury porosimetry). The results of the tests were quantified numerically to compare them. The velocity of propagation of ultrasonic waves was measured before and after the tests. After the statistical analysis, significant correlations were found between the FT and SC tests, and between the connected porosity and the durability index of the rocks. 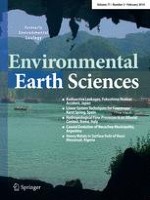 Phosphorus release kinetics in a soil amended with biosolids and vermicompost