If a liquid pressure drops below the critical pressure of the cavitation nuclei—typically tiny bubble of non-condensable gas—these ones expand rapidly because of intense vaporization and become vapour bubbles. The concentration of cavitation nuclei significantly influences the critical pressure where cavitation is initiated, which is corroborated by previous studies showing that the interaction phenomena between bubbles are important at the early stage of cavitation inception. However, prediction of the critical pressure of cavitation nuclei, considering the interaction of other germs, is still beyond the current state of the art. In this work, a simplified analysis of the theoretical formulation of critical pressure for multiple bubbles, taking into account the interactions between bubbles, is conducted. The critical pressure derived explicitly from the Rayleigh–Plesset equation—using either a quasi-static or a linear dynamic approach—is compared with the inception pressure obtained from the numerical model proposed previously in Adama Maiga (Int J Eng Res 8(4):183–213, 2015). The comparison shows a significant disagreement in case the quasi-static is applied, whereas a fair agreement is obtained if the linear dynamic is used. The results also show that increasing the polytropic exponent \(\gamma\), i.e. the effect of temperature, delays the bubble nucleation. Conversely, the Reynolds and Weber numbers based on the average bubble radius are not influenced by \(\gamma\). The study also confirms that the inter-bubble distance \(D_{ij}\) significantly influences the critical pressure, i.e. the process of bubble nucleation. The critical Reynolds and Weber number, which trigger the activation of the small bubbles, depend significantly on the number of interacting bubbles. 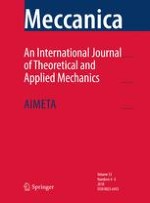 A state space approach for the eigenvalue problem of marine risers