An electro-hydraulic servo valve plays an important role in energy conversion and control of hydraulic equipment. However, this type of valve is characterized by strong coupling of fluid, complex structures, electromagnetic activity, and temperature distribution. Due to its complexity, researchers have been concentrating on a variety of servo valves for years [ 1, 2]. Compared with more traditional nozzle flapper or jet-pipe servo valves, a deflector jet servo valve (DJV) was designed with consideration of both pollution resistance and dynamic performance, and has become a new crucial focus of activity.
It is generally accepted that the research on DJVs is derived from the jet pipe valves. Somashekhar et al. [ 3] established a numerical model including a jet pipe valve’s hydrostatic pressure cavities and armature components, and the effect of the fluid structure interaction on the equilibrium was analyzed. How the wall surface roughness acts on the jet flow pattern was analyzed by Pham [ 4]. Then other scholars built numerical models of the jet pipe valve [ 5, 6], and the effect of various factors on the jet characteristics was studied by RANS simulation [ 7, 8].
Anzeige
By comparison, the hydraulic amplifier of a DJV is more complex because of a V-shaped tapered slit in the deflector and the particular shape of the receiving port. Applying the standard k- ε turbulence model, Dhinesh [ 9] confirmed that the pressure difference of the two control chambers in the numerical simulation was lower than the experimental value, which was not explained. Then other scholars also carried out RANS simulations [ 10– 12] and tried to explore the influence of the structural parameters, machining technologies, and external conditions on the flow pattern [ 13, 14]. In 2015, Yin et al. [ 15] built a simplified 3D model, using an RNG k-ε turbulence model to analyze the factors affecting cavitation. Then Jiang et al. [ 16] constructed a 3D model using tetrahedral meshes and obtained more detailed simulation results. However, for these 3D models, the flow field was assumed to have a uniform thickness and the same outflow location as the 2D model, which is not quite consistent with the actual structure. In terms of theoretical exploration, Dhinesh [ 9] and other scholars [ 17– 20] built flow and pressure analytical equations based on throttling theory, which were different from the phenomenon of simulation. Assuming that the jet was submerged and that the flow in the receiver was a piston, Li [ 5] made progress in the theoretical description of the receiver flow pattern. On the basis of the jet wall attachment theory, Yan et al. [ 21] modelled the flow distribution in the deflector analytically. Then Yan et al. [ 22, 23] applied the impact jet theory to the description of the DJV’s two jets and proposed an integrated theoretical model. With regard to experimental research, Li [ 24] established a visualized DJV jet prototype.
To sum up, the method for theoretical exploration of the DJV is shifting from throttling theory to jet theory, and the 2D numerical model is being replaced by a 3D one. However, the experimental results hardly conform to theoretical calculations and simulations. Specifically, the receiver pressure from simulation and theoretical calculation is always lower than the experimental values. Therefore, for the prestage pressure gain, it is very difficult to obtain consistent results in calculations, simulations, and experiments. To solve these issues and attain a better description of the DJV internal flow characteristics, a 3D numerical model with consideration of the return flow along the force feedback rod was built. Meanwhile, two essential assumptions were presented for modification of the theoretical model. Finally, an experiment on the receiver pressure was performed to verify the above theoretical and simulated analyses.

2.2 Velocity Distribution of the First Jet

2.3 Stagnation Point in the Deflector

2.4 Stagnation Point in the Deflector

3.1 Flow Distribution of the 3D Simulation

Because the structure of the deflector valve is very small and complex, in order to explore the internal flow pattern, explain the inaccuracy of the theoretical model, and modify the theoretical model, the numerical simulation needs to show the detailed features of the flow field intuitively.
To address the inaccuracy of the 2D simulation, a 3D model of the prestage fluid was constructed, as illustrated in Figure  8. Numerical simulations show that the mesh generation of the DJV’s 3D model is very important. Any tiny unhealthy mesh might cause the simulation’s divergence or the result’s significant incorrectness. Because the deflector jet structure is quite sophisticated and the complexity level of each part is significantly different, the geometric model needs to be partitioned before mesh generation. For the critical parts of the flow field, such as the jet inlet, the deflector’s V-shaped structure, and the receiver entrances, denser hexahedral meshes were applied, as shown in Figure  9.
×
×
However, in the parts, such as the inflow chamber and the receiver chambers, the fluid’s momentum does not change dramatically, so the tetrahedral meshes were adopted and their size made consistent with the local scale of the flow field, as shown in Figures  10 and 11.
×
×
Therefore, without affecting the simulation accuracy, the difficulty of mesh generation and the requirement for computer capacity were reduced. Although automatic mesh generation technology was implemented, some low quality meshes needed to be dealt with. Finally, the deflector jet structure’s 3D model with 5441561 meshes was obtained, as shown in Figure  12.
×
Based on the standard k- ε turbulent model, the 3D flow field was simulated and it was ensured that all the residuals were less than 10 −5. Boundary conditions are shown in Table  3, and the simulation parameters are given below. The hydraulic diameters of the inlet and the outlet are 1.15 mm and 1.03 mm, and the turbulence intensity is 10%. In order to improve the precision of calculation, the second-order upwind was selected in the simulation. Figure  13 displays the velocity vectors of the flow field and clearly describes the flow pattern of the first jet, the second jet, and the impact jet near the receivers.
Table 3
Boundary conditions
×
In order to observe the pressure distribution of the flow field, the pressure contour of typical sections was extracted, as shown in Figure  14. It was learned that the pressure in the flow field was approximately equal to the back pressure, except in the inlet chamber, V-shaped structure, and the receiver chambers.
×
Figure  15 shows the central section’s pressure contour. According to the 3D simulation, the negative pressure area is too small to display and is attached to both sides of the shunt wedge; thus, almost all the regions have positive pressure. That is, there will be no cavitation on both sides of the second jet. The receiver pressures reach 5.3 MPa, which is much higher than the theoretical calculation and 2D simulation. However, this result matches the experiment better. The balance pressures obtained by different methods are listed in Table  4.
Table 4
Comparison of the balance pressures
×
Therefore, compared with 2D numerical simulation and previous calculations, the new 3D numerical model has a more accurate result for the balance pressure, which can prove the validity of this numerical model to a certain extent.
With regard to the velocity distribution, the simulation shows that there is no obvious reflux in the V-shaped structure, which means little energy loss. Remarkably, the core area of the first jet is significantly longer and almost penetrates the deflector, as shown in Figure  16. All these results are quite different from the theoretical analysis and 2D simulation.
×
Moreover, the pressure along the impact surface in the 3D simulation is higher than that in the 2D simulation, as shown in Figure  17. It is worth noting that the 3D simulated pressure-drops on both sides of the shunt wedge are much greater than in the 2D simulation and two pressure singularities occur, which should be related to the higher velocity of the second jet. This discovery shows that the fluid close to the shunt wedge cannot resist the impact of the second jet. The problem now with the 3D jet is the existence of microscale cavitation caused by the pressure singularities.
×

3.2 Discussion on the Flow Pattern

Obviously, the 3D model is more consistent with the actual structure, so a new opportunity is provided to estimate the flow pattern in the deflector jet structure. First, a streamline graph was obtained, as shown in Figure  18, which shows that the flow in the deflector jet structure is never a planar flow as assumed in the 2D simulation and in the theoretical model. Moreover, it contains a complicated flow pattern, including lots of vertical flow.
×
Observing the streamlines in the V-shaped structure, as shown in Figure  19, we can notice that there are two symmetrical vortexes in the deflector, and that vertical spiral flow exists. This spiral flow is representative and can be thought to be one of the important features of the deflector jet valve.
×
The complete flow path can be analyzed with reference to Figure  20. After the fluid enters the deflector at the inlet, it passes through the deflector and the gaps on both sides of the deflector many times, and finally returns to the outflow interface with the back pressure. The complexity of this flow is far beyond the description in the 2D simulation.
×
Therefore, the flow in the deflector jet structure can be divided into the six phases shown in Figure  20. Phase 1 is the forward flow, which starts from the inlet and passes through the deflector. Phase 2 is the return flow after impacting the deflector, which means that the oil returns to back pressure zones on both sides after the second jet. Phase 3 is defined as entrainment flow. The first jet leads to the entrainment effect, causing the oil in the back pressure zone to flow to the inlet through the gap. Phase 4 is the spiral flow, by which the oil in the deflector finishes the spatial movement perpendicular to the central section. Phase 5 is the free flow in the back pressure zone, which has a random trajectory. Last, Phase 6 is departing flow, by which the oil leaves the structure and returns to the outflow interface. These six phases can be used to accurately describe the flow pattern in the deflector valve. However, with 2D simulation, only Phases 1 and 2 can be simulated properly. Remarkably, with regard to Phase 3, the 2D simulation shows the opposite flow direction. Therefore, the 3D simulation has much better credibility and the 2D simulation defects are identified.

4 New Assumptions and Modification of the Theoretical Model

4.1 Assumption of the Jet Core Length

(1)
The analysis revealed that the fluid near the shunt wedge cannot resist the impact of high-speed fluid, so the assumption of the effective working length is suitable for the theoretical calculations. Because the real spatial flow in the deflector is more open, a longer core area should be given in the theoretical model.
(2)
The receiver’s pressure in the 3D simulation reaches 5.3 MPa, which is clearly higher than the 2D simulation result. This means that the actual energy loss from internal flow is much less than in the traditional view, because there is no significant reflux for the first jet.
(3)
Different from the traditional simulated 2D flow, the 3D simulation shows that the actual flow in the deflector jet valve is a complex spatially and involves six flow phases. This discovery is favorable for understanding the complexity of the DJV’s flow pattern. 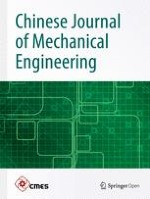 Mechanism of Spine Motion About Contact Time in Quadruped Running