In this section, the compliance modeling of the open- and closed-loops serial compliant mechanisms when the external loads are applied on the rigid links is discussed.

4 Applications in the Analysis of Serial Flexure-Based Compliant Mechanism

Several specific examples are given in this part to illustrate the effectiveness and validity of the compliance modeling of serial flexure-based compliant mechanisms and the force equivalent method.

A complex open-loop serial compliant mechanism was designed, as shown in Fig.  5. Circular flexure hinge was selected as the flexure member. The derived models based on the matrix method were used to analyze its compliance related to the given loads and displacement output points, as shown in Fig.  6. The finite element analysis (FEA) result was used as a benchmark to verify the accuracy of the analytical model.
×
×
The dimensions of the open-loop compliant mechanism were shown in Fig.  5. The geometric parameters of the circular flexure hinge were shown in Fig.  7, and their dimensions were given as r = 5 mm, W = 5 mm, t = 1 mm, 3 mm, and 5 mm, respectively.
×
The motion of this compliant mechanism is mainly provided by the deformations of all the circular flexure hinges. Therefore, an accurate compliance equation of the flexure hinge is important for obtaining a precise compliance model of the entire mechanism. An empirical compliance equation[ 23] for the circular flexure hinge was adopted in this paper.
Firstly, point 1 was selected as both the loading point and the displacement output point. Utilizing the FEA result as the benchmark, the calculating errors of each compliance components of the mechanism were given in Table  1.
Table 1
Calculation errors of each compliance component %
The results show that the analytical model has relative high calculation accuracy. One may see that the calculation errors increase as the minimum thickness t of the flexure hinge grows. The possible reason is that the rigid links are not absolute rigid and also undergoes elastic deformations. When the circular flexure hinges grow thicker, the relative proportion of the deformations of the rigid links increases. Considering the compliance of the rigid links, the calculation errors of each compliance components of the mechanism were given in Table  2. It shows that the calculation accuracies are obviously improved, especially when t = 3 mm and 5 mm.
Table 2
Calculation errors of each compliance Component %
Secondly, the external load was applied at point 2 and vertical to the surface, and point 3 was selected as the displacement output point. The compliance of the mechanism calculated through the FEA and the analytical model were given in Tables  3 and 4, respectively.
Table 3
Compliance of the mechanism calculated through the FEA μm / N
Table 4
Compliance of the mechanism calculated through the analytical model μm / N
The simulation analyses show that the matrix method is applicable to the compliance modeling of the open-loop serial compliant mechanism related to any given output points and external loads applied on the rigid links. Additionally, the compliance of the rigid links cannot be neglected when the flexure hinges are relative thick and the length of the open-loop serial chain is long.

4.2 Transformation of the External Loads Applied on Flexure Members 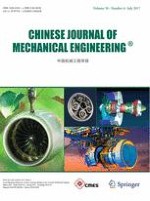 Kinematics and Path Following Control of an Articulated Drum Roller