The purpose of the current research effort is to develop a framework for a better understanding of commuter train users’ access mode and station choice behavior. Typically, access mode and station choice for commuter train users is modeled as a hierarchical choice with access mode being considered as the first choice in the sequence. The current study proposes a latent segmentation based approach to relax the hierarchy. In particular, this innovative approach simultaneously considers two segments of station and access mode choice behavior: Segment 1—station first and access mode second and Segment 2—access mode first and station second. The allocation to the two segments is achieved through a latent segmentation approach that determines the probability of assigning the individual to either of these segments as a function of socio-demographic variables, level of service (LOS) parameters, trip characteristics, land-use and built environment factors, and station characteristics. The proposed latent segment model is estimated using data from an on-board survey conducted by the Agence Métropolitaine de Transport for commuter train users in Montreal region. The model is employed to investigate the role of socio-demographic variables, LOS parameters, trip characteristics, land-use and built environment factors, and station characteristics on commuter train user behavior. The results indicate that as the distance from the station by active forms of transportation increases, individuals are more likely to select a station first. Young persons, females, car owners, and individuals leaving before 7:30 a.m. have an increased propensity to drive to the commuter train station. The station model indicates that travel time has a significant negative impact on station choice, whereas, presence of parking and increased train frequency encourages use of the stations. 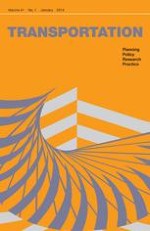 The revenue and environmental benefits of new off-peak commuter rail service: the case of the Pascack Valley line in New Jersey

Analysis of Metro ridership at station level and station-to-station level in Nanjing: an approach based on direct demand models