Dexterous, within-hand manipulation, in which an object held in the fingertips is manipulated by the fingers, shares many similarities with parallel robots. However, their mathematical formulations appear to be substantially different. This paper introduces a formulation typical from parallel manipulators to model the kinetostatics of a hand-plus-object system, including the fingertip forces formulation to describe a feasible grasp. The framework also includes compliance in the joint and considers pulling cable transmission mechanisms to model underactuated hands. The resultant static equilibrium equations are equivalent to the typical grasping formulation, but the involved matrices are different, allowing the interpretation of the resulting Jacobian matrix in terms of wrenches exerted by the joints.We primarily focus our efforts on describing in detail the theoretical framework, and follow this with an example application using a three-fingered underactuated hand. We show how the natural redundancy present in fully-actuated hands can be eliminated using underactuation, leading to simplified non-redundant systems that are easier to control. For the studied hand, we show how to use the framework to analyze the design parameters involved in the underactuation and their relationship with the resultant feasible workspace where the object can be manipulated. 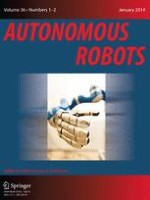 Autonomously learning to visually detect where manipulation will succeed