Soil CO2 efflux from an ecosystem responds to the active layer thawing depth (H) significantly. A Li-8100 system was used to monitor the CO2 exchange from a wet meadow ecosystem during a freeze–thaw cycle of the active layer in a permafrost region on the Qinghai-Tibet Plateau. An exponential regression equation (\( F_{\text{soil\, flux}} = 1.84e^{0.023H} + 5.06\,R^{2} = 0.96 \)) has been established on the basis of observed soil CO2 efflux versus the thawed soil thickness. Using this equation, the total soil CO2 efflux during an annual freeze–thaw cycle has been calculated to be approximately 8.18 × 1010 mg C. The results suggest that freeze–thaw cycles in the active layer play an important role in soil CO2 emissions and that thawed soil thickness is the major factor controlling CO2 fluxes from the wet meadow ecosystem in permafrost regions on the Qinghai-Tibet Plateau. It can be concluded that with active layer thickening due to permafrost degradation, massive amounts of soil carbon would be emitted as greenhouse gases, and the permafrost region would become a carbon source with a positive feedback effect on climate warming. Hence, more attention should be paid to the influences of the active layer changes on soil carbon emission from these permafrost regions. 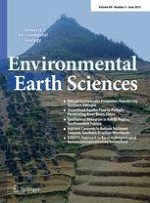