Wood distillate (WD), also known as pyroligneous acid or wood vinegar, is a heterogeneous solution obtained from the thermochemical conversion of the constituents of the plant biomass, mainly the polysaccharides, cellulose and hemicelluloses, and the non-linear aromatic polymer lignin (Mathew and Zakaria 2015). WD is a yellowish brown or dark brown liquid with acidic pH and a chemical composition highly variable depending on the heating rate, temperature, and nature of the raw material used in pyrolysis. It usually comprises a complex mixture of volatile organic compounds such as organic acids, aldehydes, phenols, alcohols, ketones, pyranfuran derivatives, and polyphenolic compounds (Hou et al. 2018; Suresh et al. 2019).
WD finds application in diverse areas, as antioxidant, antimicrobial, antiinflammatory, plant growth stimulator, coagulant for natural rubber, and termiticidal and pesticidal agent (Grewal et al. 2018). Moreover, it was found effective against a wide range of organisms, eukaryotes and prokaryotes, and a clear correlation between WD antimicrobial properties and its chemical composition was documented (Hou et al. 2018; Suresh et al. 2019). The main aim of this study was to investigate the antibacterial activity of WD obtained by native chestnut biomass and get indications of its possible cellular targets.
Anzeige

The chestnut ( Castanea sativa Mill.) WD object of the study is produced in Val di Chiana (Arezzo, Italy) by Esperia s.r.l. (RM Group Energy Solutions), and distributed by BioDea©. The data sheet of the product reports that it is obtained from virgin residual wood biomass in the countercurrent of steam from a pyrogasification reactor with the same physiological water and extracted at different temperature gradients, with a maximum output from the reactor of 75 °C. The resulting WD is composed of more than 300 organic substances and it is rich in tannins (0.13%) and polyphenols (23–26 g/kg) [ https://​www.​biodea.​bio/​website/​wp-content/​uploads/​2020/​05/​Biodea-Wood-Distillate.​pdf]. The sample object of this study (product batch: 1–05/2019, expiry date: 60 months) was kindly provided by S. Loppi (Department of Life Sciences, University of Siena). Minimum inhibitory concentration (MIC) of WD was evaluated against 14 reference strains representative of Gram-positive and Gram-negative bacterial species, including human and/or fish pathogens obtained by the American Type Culture Collection (ATCC) and Deutsche Sammlung von Mikroorganismen und Zellkulturen (DSMZ): Staphylococcus aureus ATCC 25923, Enterococcus faecalis ATCC 29212, Bacillus subtilis ATCC 6633, Bacillus cereus ATCC 11778, Micrococcus luteus ATCC 4698, Escherichia coli ATCC 23739, Salmonella typhimurium ATCC 23853, Enterobacter cloacae ATCC 13047, Proteus vulgaris ATCC 6380, Pseudomonas aeruginosa ATCC 17853, Vagococcus salmoninarum DSM 6633, Lactococcus garviae DSM 6783, Listonella anguillarum DSM 11323, and Aeromonas salmonicida DSM 46293. Luria–Bertani (LB) [1% Bacto tryptone, 0.5% Bacto yeast extract, 0.5% NaCl, pH 7.2] was the medium used for the routine cultivation and maintenance of bacteria, while Mueller Hinton (MH) broth (Oxoid, Thermo Fisher Scientific, Basingstoke, UK) was used for antibacterial quantitative assay.
MICs were carried out with a broth microdilution method (NCCLS 2001). Twofold serial dilutions of WD in MH broth were prepared directly in 96-well microdilution plate (the test was performed in duplicate for each strain on the same plate). The bacterial inoculum was added to give a final concentration of ~ 5 × 10 5 colony-forming unit (CFU)/mL in each well, with the exception of that intended for use as a negative control. The plate was then covered with a sterile sealer and incubated for 24–48 h at 30 °C. MIC was determined as the lowest concentration of the extract inhibiting the visual growth of the test cultures. For all strains two independent experiments were carried out. Minimum bactericidal concentration (MBC), namely the minimum concentration needed to cause a 3-logarithmic decrease (99.9% killing) in the size of the standard inoculum was also determined for all ATCC strains. The entire broth dilutions that had inhibited growth of bacteria (i.e., those at or above the MIC) were spread onto LB-agar (1.6 g/L) plate and incubated for 24 to 48 h in order to determine the number of CFUs.
A “blue halo assay” was performed in order to detect a possible mechanism of action of WD (Bianchi and Baneyx 1999). Lysogenic strains of E. coli K-12 carrying single-copy gene fusions between the lacZ reporter gene and promoters induced by cold shock ( cspA), cytoplasmic stress ( ibp), or protein misfolding in the cell envelope (P3 rpoH) were used in order to categorize known antibacterial agents on the basis of their cellular targets (Bianchi and Baneyx 1999). E. coli strains ADA110 λϕ [ ibp:: lacZ], ADA 310 λϕ [cs pA:: lacZ], and ADA 410 λϕ [P3 rpoH:: lacZ] were kindly provided by F. Baneyx (Dept. of Chemical Engineering & Bioengineering, University of Washington, US). The assay was carried out according to the procedure reported by Bianchi and Baneyx ( 1999). In brief, LB top agar (0.7% agar) supplemented with ADA110, ADA 310, and ADA 410 cells was poured over LB agar plates (Ø 5 cm) spread with 10 μl of 50 mg/ml 5-bromo-4-chloro-3-indolyl β-D-galactopyranoside (X-Gal; Sigma-Aldrich, Darmstadt, Germany). Antibiotic disks (Whatman, Ø 6 mm) were impregnated with 10 μl of WD (1:100 in 10 mM MgSO 4) and then placed on the agar surface using sterile forceps. The plates were incubated overnight at 30 °C or 37 °C. Controls including antibiotics streptomycin sulfate, carbenicillin, and polymyxin B sulfate (all purchased from Sigma-Aldrich) were also carried out as previously described (Bianchi and Baneyx 1999).

For each strain, MICs, collected from two independent experiments, were completely superimposable to each other. All results obtained after 24 and 48 h of growth at 30 °C are presented in Table 1. After 24 h of growth, gram-positive and gram-negative bacteria were inhibited by WD with MIC ranging from 0.39% (v/v) to 1.56%; after prolonged incubation, %MIC values ranged from 0.78 to 1.56, with the latter value being shared by the majority of the tested strains (six gram-positive and four gram-negative). MBCs resulted comparable ( M. luteus, B. cereus, and B. subtilis) or only varied by one dilution factor (all remaining strains); the MBC/MIC ratio (≤ 2) showed that WD had bactericidal activity against all ATCC strains tested.
Table 1
MIC values of WD against reference strains after 24 and 48 h of incubation
Anzeige
“Blue halo assay” results indicated that, at sublethal concentrations, WD induced both the P3 rpo H:: lacZ and ibp::l acZ fusions (Fig.  1). This induction profile was also reported for the membrane damaging peptide polymyxin B (Bianchi and Baneyx 1999). On that basis, WD likely causes the perturbation of cell wall components and plasma membrane of gram-negative and gram-positive bacteria. The observation is in agreement with the proposed model of interaction with bacterial structures of polyphenols (Papuc et al. 2017), which are present, at a relatively high concentration, in the WD object of this study.
×

WD from chestnut biomass was found to have a spectrum of activity including both gram-positive and gram-negative reference strains belonging to bacterial species representative of human and/or fish pathogens. The current antibacterial therapy is being increasingly threatened by the emergence and spread of multidrug resistant bacteria. The present observations provide a basis for further investigations into the antibacterial properties of WD in order to evaluate its possible development into useful sterile products for medical, and livestock breeding applications as in aquacultures. 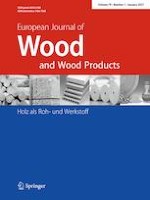