» Jetzt Zugang zum Volltext erhalten
Wichtige Hinweise
Timothy J. Muris is Foundation Professor of Law at Antonin Scalia Law School at George Mason University and senior counsel at Sidley Austin LLP; he previously served as Director, Bureau of Consumer Protection (1981–1983), Director, Bureau of Competition (1983–1985), and Chairman (2001–2004) of the Federal Trade Commission (FTC). Jonathan E. Nuechterlein is partner at Sidley Austin LLP and previously served as General Counsel of the FTC (2013–2016). Our knowledge of the A&P story began when one of us was an FTC representative on a Justice Department task force to study the Robinson–Patman Act in the mid-1970s. In 2017, we approached Amazon Inc. for funding to tell the story, and we gratefully acknowledge its support. In addition, we have counseled other technology companies on issues that are relevant to this article, and some matters addressed below fell within our responsibility during our tenures at the FTC. All views expressed here are our own.

Critics from both the right and the left claim that modern antitrust doctrine, rooted in consumer welfare, is inadequate to handle the challenges of the twenty-first century economy. They express nostalgia for 1960s antitrust, when the field had no clear objectives and cases were decided on impressionistic notions of “fairness” and good corporate citizenship. This article exposes the intellectual void at the heart of this new populist movement and begins by following Justice Holmes’ tenet that “a page of history is worth a volume of logic.” More than 80 years ago, the A&P grocery chain was a vertically integrated retailer that made use of unprecedented scale and innovation to offer consumers a wider range of products than the competition and at lower prices. Yet A&P’s very success, which came at the expense of smaller and less efficient competitors, triggered a backlash: first from Congress, in the form of the Robinson–Patman Act, and then from the Justice Department, in the form of successful prosecution under the Sherman Act. These attacks on A&P bear an eerie resemblance to attacks today on leading online innovators. Increasingly integrated and efficient retailers—first A&P; then “big box” brick-and-mortar stores; and now online retailers—have challenged traditional retail models by offering consumers lower prices and greater convenience. For decades, critics across the political spectrum have reacted to such disruption by urging Congress, the courts, and the enforcement agencies to stop these American success stories by revising antitrust doctrine to protect small businesses rather than the interests of consumers. Using antitrust law to punish pro-competitive behavior makes no more sense today than it did when the government attacked A&P for offering consumers too good a deal on groceries. In addition, antitrust doctrine does not need an overhaul. It is shaped by many economic perspectives, follows no one “School,” and is flexible enough to address any monopoly abuses in today’s economy. It is also well-calibrated to serve its central function: promoting consumer welfare. It does so not only by prohibiting conduct that harms consumers in the long run, but also by avoiding interference with conduct that might appear problematic to non-economists but that demonstrably benefits consumers over time. Antitrust remains a work in progress, but it is far superior to any alternative that the critics propose. 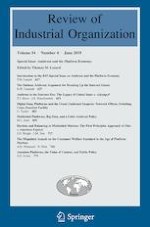 The Dubious Antitrust Argument for Breaking Up the Internet Giants