Application of electrical resistivity tomography to evaluate the variation in moisture content of waste during 2 months of degradation | springerprofessional.de Skip to main content
TOOLBAR 1 2 3 4
SUCHE MENÜ 1 2 3 4

Moisture content is considered to play an important role in the degradation of municipal solid waste (MSW). The present study was carried out to test the use of electrical resistivity tomography (ERT) to estimate the daily variations in the volumetric moisture content (VMC) during waste degradation. The degradation of MSW in a laboratory-scale reactor was monitored daily by ERT and time domain reflectometry (TDR) over a period of 55 days after the waste was landfilled. The bulk electrical resistivity, normalised to a standard temperature of 25 °C, was compared to the VMC obtained by TDR. The relationship between the bulk electrical resistivity and the VMC was not obvious in the upper unit, because there was a bias in the positions of the ERT and TDR measurements due to the settling of the waste. However, the bulk electrical resistivity depended on the VMC in the lower unit of the reactor. According to a power equation fitted in the lower unit, the 2-D distributions of the VMC are presented. Variations in the VMC reflected the processes of waste degradation and leachate transportation. Furthermore, the volume of water stored in the lower unit of the reactor was calculated and found to be consistent with that estimated from the gravimetric moisture content during waste sampling. The data showed that ERT could be used to estimate the variations in moisture content in the initial period following the landfilling of waste. 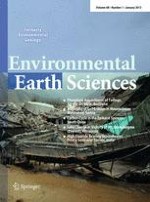 Mechanism of groundwater bursting in a deep rock salt mine region: a case study of the Anpeng trona and glauber mines, China

Environmental evolution and hydrodynamic process of Dongping Lake in Shandong Province, China, over the past 150 years