In the last decades, accidents involving dams and other hydraulic structures have become more frequent, increasing social pressure on the existing dams safety conditions. This fact demands commitment of professionals and companies with new plant project safety approaches. The failure of a hydroelectric concrete structure can be caused by several factors, however the main causes of failure are related to exceptional floods and foundation-related problems, which are the focus of this paper. In order to understand the influence of the rock mass characteristics, especially the contact plan with the concrete structure, this work considers the variability of geotechnical parameters, drainage efficiency, specific gravities and seismic acceleration to determine the probability of failure of these structures. To achieve this objective, the work makes use of a case study, the spillway of Baixo Iguaçu HPP, on Paraná/Brazil during its design and construction phase, determining the probability of failure by sliding. The study reproduces the foundation condition throughout a FEM hydrogeological model and determines the acting uplift through seepage analysis. The probability of failure was determined by Monte Carlo method using the probability distribution of each variable, performing 5,000,000 evaluations for each simulation. Simulations were performed for flow range varying from the ecological flow (200 m3/s) to exceptional floods with 10,000 years of recurrence time (56,362 m3/s) and its respective water levels. The most critical condition found was the extended operation at the minimum (ecological) flow, while for a normal operation, at the flow of 2598 m3/s, the order of the probability of failure is one in a million. The paper show how using hydrogeological model can lead to more realistic values of uplift pressures than using simplified methods recommended in the international guidelines, and consequently lead to a more realistic probability of failure. 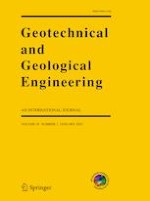 Comments on: Correlations Between Slake-Durability Index and Engineering Properties of Some Travertine Samples Under Wetting–Drying Cycles by Davood Fereidooni and Reza Khajevand, Geotechnical and Geological Engineering (2018) 36:1071–1089