The online version of this article (doi:10.​1007/​s10531-016-1263-y) contains supplementary material, which is available to authorized users.
This article belongs to the Topical Collection: Biodiversity protection and reserves.

Owning to advantages over traditional species identification methods, DNA barcoding is suggested to be a promising tool in conservation research. However, the use of DNA barcoding to accurately identify unknown samples in conservation practices has not been well documented in the literature. To illustrate this issue, we implemented a survey of endangered birds and mammals in China based on mitochondrial Cytochrome c Oxidase subunit I (COI) gene. We included mostly confiscated specimens and non-invasive samples while concealing species information to simulate real-world scenarios of identification. In total, 47 avian and 39 mammalian specimen were re-identified by sequential analyses of online species assignment, genetic distances, phylogenetic reconstruction, and diagnostic nucleotide method. With this multiple analyses approach, 82 individuals were accurately assigned to the species level and four individuals to the genus level. 78.72% of the avian specimen and 87.18% of mammalian specimen identifications were consistent with morphological classification. Among those inconsistent with morphological classification, we identified several potential errors including misidentification based on morphology and mislabelling that may have occurred while combining results from different analytical methods. Our case study not only enriches the barcode database, but also reports a successful application of DNA barcoding identification to conservation practices, which could effectively facilitate species identification of unknown samples in conservation practices in the future. 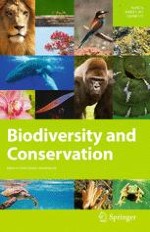 A review of parasites in the Tasmanian devil (Sarcophilus harrisii)