Even though there is a general consensus in the regional economics literature about the relevance of agglomeration economies in the distribution of economic activity, analyses of regional differences in employability in Spain have found limited empirical evidence about the role played by population concentrations. Our hypothesis in this paper is that the lack of evidence supporting theoretically expected behavior about the role of agglomerations is mainly explained by the fact that administrative rather analytical regions have been used. To check this, we propose a study based on spatially disaggregated data from the Population Census and its aggregation into analytical regions that incorporate ideas from the new economic geography. Our results regarding the effect of space on employment opportunities with this alternative classification suggest, as expected, that living in large cities or close to metropolitan areas increases the possibilities of being employed. The different results support the need for more highly disaggregated data at spatial level in order to overcome the limitations inherent to empirical analysis based on administrative regions. 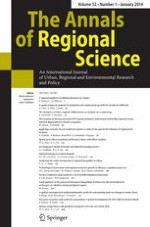 Analyzing the multi-mechanism of regional inequality in China

Optimal zoning of a mixed duopoly

The dynamics of inter-regional collaboration: an analysis of co-patenting

Trade patterns in the process of European integration: Evidence for the intraindustrial exchanges of a Mediterranean peripheral region

An intra-industry trade model in a vertical differentiation framework