Approval voting allows electors to list any number of candidates and their final scores are obtained by summing the votes cast in their favor. Equal-and-even cumulative voting instead follows the One-person-one-vote principle by endowing each elector with a single vote that may be distributed evenly among several candidates. It corresponds to satisfaction approval voting, introduced by Brams and Kilgour (in: Fara et al (eds) Voting power and procedures. Essays in honor of Dan Fesenthal and Moshé Machover, Springer, Heidelberg, 2014) as an extension of approval voting to a multiwinner election. It also corresponds to the concept of Shapley ranking, introduced by Ginsburgh and Zang (J Wine Econ 7:169–180, 2012) as the Shapley value of a cooperative game with transferable utility. In the present paper, we provide an axiomatic foundation for Shapley ranking and analyze the properties of the resulting social welfare function. 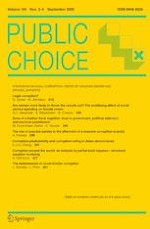 The determinants of cross-border corruption

Corruption around the world: an analysis by partial least squares—structural equation modeling

Are women more likely to throw the rascals out? The mobilizing effect of social service spending on female voters