Climate change is one of the most important global environmental challenges, which affects the entire earth system in terms of negative impacts on food production, water supply, health, livelihood, energy, etc. The intent of the present study was to assess the impact of climate change on the water balance components of a data-starved Upper Baitarani River basin of Eastern India using ArcSWAT model. The ArcSWAT model was calibrated using SUFI-2 technique. The daily observed streamflow data from 1998 to 2003 were employed for calibration and those for 2004–2005 for validation. The calibration results were found to be satisfactory with the Nash-Sutcliffe efficiency (NSE) and mean absolute error (MAE) of 0.88 and 9.70 m3/s for the daily time step, respectively. Also, the model was validated successfully for simulating daily streamflow (NSE = 0.80 and MAE = 10.33 m3/s). The calibrated and validated model was then used to evaluate basin response to the anticipated climate changes by the end of the 21st century. Twelve independent as well as twenty eight combined area-specific climatic scenarios were considered in this study to evaluate the impact of climate change on the hydrology of the basin. The analysis of model results for the 12 Independent Climatic Scenarios indicated a reduction in the surface runoff ranging from 2.5 to 11 % by changing the temperature from 1 to 5 °C, whereas the increase in rainfall by 2.5 to 15 % suggested an increase in surface runoff by 6.67 to 43.42 % from the baseline condition. In case of 28 Combined Scenarios compared to the baseline condition, the changes in surface runoff would vary from −4.55 to 37.53 %, the groundwater recharge would change from −8.7 to 23.15 % and the evapotranspiration would increase from 4.05 to 11.88 %. It is concluded that future changes in the climatic condition by the end of the 21st century are most likely to produce significant impacts on the streamflow in the study area. The findings of this study and those of follow-up studies in this direction will be useful for guiding suitable adaptation measures for sustainable water management in the basin in the face of impending climate change. 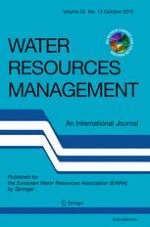