Filter paper technique (FPT) is known to measure both matric and total suctions in a wide measurement range. However, it has many individual errors due to the uncertainty of calibration curve and sensitivity of the measurements to the temperature and relative humidity variations. Besides, the ASTM procedure for FPT does not specify any sample preparation and repetition for experiments. In this regard, this study covers the reliability of suction measurements using the FPT and its application on zeolite–bentonite mixtures (ZBMs), which were proposed for use of liner material in the literature. A calibration curve for Whatman No. 42 filter paper was constructed and compared to the other calibration curves given in the literature. Due to large scatter of calibration curves, total suction measurement is found to be inconvenient for suction values under 1000 kPa. An improvement in sample preparation and necessary minimum numbers of tests are also suggested. When preparing the test specimen, the compacted sample is recommended not to be cut but to be compacted separately as upper and lower parts where the contact filter paper to be placed in between in order to obtain good contact area to measure the matric suction accurately. The necessary minimum numbers of tests for ± 10% accuracy band in a confidence level of 95% for ASTM procedure on ZBMs are suggested. Repetitions were found to vary depending on the suction type and bentonite content. Repetitions of six and eight times are recommended for 10% ZBMs for matric and total suction measurements, respectively. Similarly, for 20% ZBMs the repetitions of six and ten times are found for matric and total suction measurements, respectively. In addition, the influence of index properties and compaction states on suction was also investigated. Matric suction values decrease from dry of optimum water content to the wet of optimum water content and approach to zero for higher water contents. The suction values are found to increase with decreasing water contents where the dry density and the void ratio were constant. On the other hand, for a given water content, matric suction values are found to be increasing with increasing dry densities, while the void ratio was decreasing being more evident at relatively higher saturation degrees. 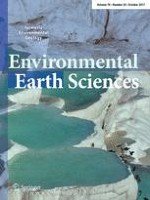