Rehabilitation of degraded forest land through implementation of carbon-sink projects can increase terrestrial carbon (C) stock. However, carbon emissions outside the project boundary, which is commonly referred to as leakage, may reduce or negate the sequestration benefits. This study assessed leakage from carbon-sink projects that could potentially be implemented in the study area comprised of 11 sub-districts in the Batanghari District, Jambi Province, Sumatra, Indonesia. The study estimates the probability of a given land use/cover being converted into other uses/cover, by applying a logit model. The predictor variables were: proximity to the center of the land use area, distance to transportation channel (road or river), area of agricultural land, unemployment (number of job seekers), job opportunities, population density and income. Leakage was estimated by analyzing with and without carbon-sink projects scenarios. Most of the predictors were estimated as being significant in their contribution to land use cover change. The results of the analysis show that leakage in the study area can be large enough to more than offset the project’s carbon sequestration benefits during the period 2002–2012. However, leakage results are very sensitive to changes of carbon density of the land uses in the study area. By reducing C-density of lowland and hill forest by about 10% for the baseline scenario, the leakage becomes positive. Further data collection and refinement is therefore required. Nevertheless, this study has demonstrated that regional analysis is a useful approach to assess leakage. 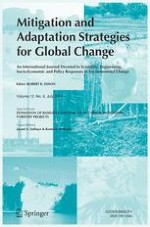 Baselines for land-use change in the tropics: application to avoided deforestation projects

Application of the “Climafor” baseline to determine leakage: the case of Scolel Té