A study has been conducted in the heavily populated coastal areas of the Puri district (Odisha, India) with the aim to: (1) identify the factors that influence the major ion composition and concentrations of trace elements in groundwater; (2) determine the spatial distribution of the water-quality parameters and how they vary on a seasonal basis. To do this, groundwater samples were collected from 60 shallow tube wells located along the Puri coast during the pre-monsoon and post-monsoon seasons. Based on their TDS content, 52% of the collected groundwater samples were identified as being brackish-to-saline and unsuitable for drinking purposes in both the pre- and post-monsoon seasons. Significant concentrations of trace elements including Ba, Br, F, Fe, Mn, and Sr were detected in most of the samples. Iron concentrations were found to be higher than the WHO drinking water guideline value (0.3 mg/l) in 92% of the samples irrespective of seasons. Elevated Mn concentrations were observed in 37% and 40% of samples during the pre-monsoon and post-monsoon seasons, respectively. In addition, fluoride concentrations in excess of the WHO limit (1.5 mg/l) were found in 15% of samples during the pre-monsoon and 23% of samples during the post-monsoon season. The concentrations of major and trace elements show wide spatial and minor temporal variations. Large spatial and limited temporal variations in Cl and Na concentrations along with considerable Br and Sr concentrations in groundwater suggest that saltwater intrusion is the dominant process controlling groundwater quality in the study area, although other processes including ion exchange, the precipitation and dissolution of minerals, microbial activity, and the weathering of aquifer material also play roles to some extent in determining the spatial and seasonal distribution of the major and trace elements in coastal groundwater. Grouping of various water-quality parameters related to these processes by principal component analysis and their linking to one cluster in the hierarchical cluster analysis further supports the view that these processes control the groundwater chemistry in the coastal aquifer. 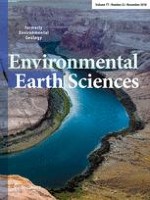 Reviews on Books and Media