Climate change and human activities are closely linked with the nutrient accumulation in sediments, but the role of influence factors and the driving mechanisms are unclear. Here, by using the generalized additive model (GAM), we investigated the contributions and driving mechanisms of climate change and human activities on TON, TN, and TP accumulation in sediments of typical lakes in the Huai River basin (Nansi Lake and Hongze Lake) from 1988 to 2018. The impacts of factors, such as air temperature (AT), real GDP per capita (GDP), population density (PD), crop sown area (CSA), artificial impervious area (AIA), and domestic sewage discharge (DSD) were considered in this study. The results of the multivariate GAM showed that the sediment variables were significantly affected by climate change in Nansi Lake, but not in Hongze Lake. AT and DSD contributed the most to the variation of sediment TOC in Nansi Lake, while the most critical factors affecting TN and TP were AT, PD and DSD. PD and CSA showed strong ability to explain the change of TOC in Hongze Lake, while CSA and DSD showed strong ability to explain the variations of TN and TP. The results show that the selected optimal multivariate GAM can well quantify the effects of climate change and human activities on nutrient enrichment in lake sediments. Effective recommendations are provided for decision-makers in developing water quality management plans to prevent eutrophication outbreaks in lake waters by targeting and controlling key factors.
Anzeige
Vorheriger Artikel Household Conflicts with Snow Leopard Conservation and Impacts from Snow Leopards in the Everest and Annapurna Regions of Nepal
Nächster Artikel Rock structures improve seedling establishment, litter catchment, fungal richness, and soil moisture in the first year after installation 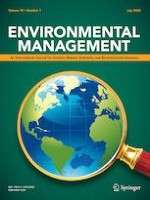 Health Assessment for Mountainous Rivers Based on Dominant Functions in the Huaijiu River, Beijing, China

A Multi-Criteria Framework for the Sustainable Management of Fisheries: a Case Study of UK’s North Sea Scottish Fisheries