We proposed an algorithm that consisted of two main stages: deformable image registration and respiratory motion simulation. Specifically, each 4DCT phase image was registered to the breath-holding CT image using the block-matching method, with erroneous spatial matches removed by the least median of squares filter and the full displacement vector field generated by the moving least squares interpolation. The lung’s respiratory motion trajectory was then recovered from the displacement vector field using the parameterized polynomial function, with fitting parameters estimated by combinatorial optimization. In this way, artifacts were located according to deviations between image points and their motion trajectories and further corrected based on position prediction.

The mean spatial error (standard deviation) was 1.00 (0.85) mm after registration as opposed to 6.96 (4.61) mm before registration. In addition, we took human observation conducted by medical experts as the gold standard. The average sensitivity, specificity, and accuracy of the proposed method in artifact identification were 0.97, 0.84, and 0.89, respectively. 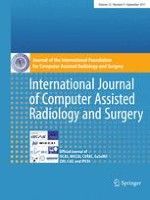