In this paper, the effect of chemical inhomogeneity on the isothermal bainite formation is investigated in medium-carbon low-silicon spring steel by dilatometry and microscopy. The analysis of the microstructure at different times during transformation shows that chemical segregation of substitutional alloying elements resulting from casting strongly affects the bainite formation by retarding the transformation kinetics and limiting the maximum achievable bainite fraction. During holding at temperatures close to and above the martensite start temperature, a homogeneous lower bainitic microstructure can be eventually obtained, whereas at higher temperatures, incomplete bainitic reaction is evident. It was also found that at the early stages of the transformation, differences in the bainite formation kinetics, due to local inhomogeneities in Cr and Mn concentration, result in retardation of the growth of bainite in the high Mn and Cr concentration regions. The calculated difference in driving force for nucleation between the enriched and the depleted areas is not by itself sufficient to explain the microstructures obtained and thus significant influence of growth on bainite formation is observed. Particularly, it was calculated and experimentally observed that Cr partitions in the carbides in the high Mn, Cr regions during the isothermal treatment, limiting the transformation kinetics. 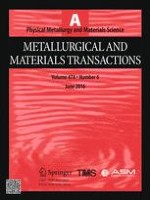 A Metric for the Quantification of Macrosegregation During Alloy Solidification