Cox models with time-varying coefficients offer great flexibility in capturing the temporal dynamics of covariate effects on event times, which could be hidden from a Cox proportional hazards model. Methodology development for varying coefficient Cox models, however, has been largely limited to right censored data; only limited work on interval censored data has been done. In most existing methods for varying coefficient models, analysts need to specify which covariate coefficients are time-varying and which are not at the time of fitting. We propose a dynamic Cox regression model for interval censored data in a Bayesian framework, where the coefficient curves are piecewise constant but the number of pieces and the jump points are covariate specific and estimated from the data. The model automatically determines the extent to which the temporal dynamics is needed for each covariate, resulting in smoother and more stable curve estimates. The posterior computation is carried out via an efficient reversible jump Markov chain Monte Carlo algorithm. Inference of each coefficient is based on an average of models with different number of pieces and jump points. A simulation study with three covariates, each with a coefficient of different degree in temporal dynamics, confirmed that the dynamic model is preferred to the existing time-varying model in terms of model comparison criteria through conditional predictive ordinate. When applied to a dental health data of children with age between 7 and 12 years, the dynamic model reveals that the relative risk of emergence of permanent tooth 24 between children with and without an infected primary predecessor is the highest at around age 7.5, and that it gradually reduces to one after age 11. These findings were not seen from the existing studies with Cox proportional hazards models. 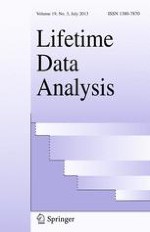 On collapsibility and confounding bias in Cox and Aalen regression models