The Ni-base superalloys, which are normally melted and cast in a vacuum, entrain their surface-oxide film during turbulent pouring of the melt; unfortunately at this time, this process is universally practiced for investment castings of these materials. The entrained film becomes a bifilm crack automatically, so that cast alloys have a large population of cracks that controls their failure behavior. The problems of the growth of single crystals and the welding of polycrystalline alloys are reviewed to illustrate the central role of bifilms in the cracking of turbine blades, the heat-affected zones of welds, and the reliability of properties. It has been demonstrated that improved gravity pouring systems can reduce these problems significantly, but only countergravity filling of molds is expected to result in defect-free castings. Recent cases in which turbine blades failed in service are examined, and the central role of bifilm defects in these failures is discussed. 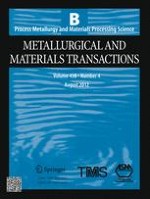 Study of an Energy Storage and Recovery Concept Based on the W/WO3 Redox Reaction: Part I. Kinetic Study and Modeling of the WO3 Reduction Process for Energy Storage

Correlation Between Viscosity and Electrical Conductivity of Aluminosilicate Melts