We report here the versatility of Mn-doped ZnS quantum dots (ZnS:Mn QDs) synthesized in aqueous medium for generating reactive oxygen species and for detecting cells. Our experiments provide evidence leading to the elimination of Cd-based cores in CdSe/ZnS systems by substitution of Mn-doped ZnS. Advanced electron microscopy, X-ray diffraction, and optical spectroscopy were applied to elucidate the formation, morphology, and dispersion of the products. We study for the first time the ability of ZnS:Mn QDs to act as immobilizing agents for Tyrosinase (Tyr) enzyme. It was found that ZnS:Mn QDs show no deactivation of Tyr enzyme, which efficiently catalyzed the hydrogen peroxide (H2O2) oxidation and its eventual reduction (−0.063 V vs. Ag/AgCl) on the biosensor surface. The biosensor showed a linear response in the range of 12 μmol/L–0.1 mmol/L at low operation potential. Our observations are explained in terms of a catalase-cycled kinetic mechanism based on the binding of H2O2 to the axial position of one of the active copper sites of the oxy-Tyr during the catalase cycle to produce deoxy-Tyr. A singlet oxygen quantum yield of 0.62 in buffer and 0.54 in water was found when ZnS:Mn QDs were employed as a photosensitizer in the presence of a chemical scavenger and a standard dye. These results are consistent with a chemical trapping energy transfer mechanism. Our results also indicate that ZnS:Mn QDs are well tolerated by HeLa Cells reaching cell viabilities as high as 88 % at 300 µg/mL of QDs for 24 h of incubation. The ability of ZnS:Mn QDs as luminescent nanoprobes for bioimaging is also discussed. 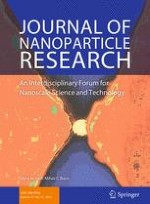 Synthesis of silica nanoparticles for encapsulation of oncology drugs with low water solubility: effect of processing parameters on structural evolution

TiO2 nanoparticles supported on the Fe3O4@SiO2 nanocomposites: a novel magnetic nanocatalyst for the synthesis of 2-aminothiazoles