Root-knot nematodes are mainly controlled by using synthetic nematicides, but their excessive use is prohibited due to associated health hazards which demand for suitable alternatives. The overreliance on nematicides can be curtailed by using biological control agents possessing nematicidal or nematostatic properties. Therefore, in the present study, effectiveness of seven indigenous species of Trichoderma were tested for their ability to suppress the population of Javanese root-knot nematode, Meloidogyne javanica, and improve growth variables of green gram. All the Trichoderma species resulted in an increase in shoot and root lengths and shoot weight while a decrease was observed in root weight. Maximum increase in shoot length (45.5%) was found in case of T. harzianum followed by T. hamatum and T. viride whereas the increase was the minimum where T. pseudokoningii and T. koningii were applied. Similarly, maximum increase in shoot weight was recorded with T. viride (56.1%) followed by T. harzianum (55%) and the minimum with T. pseudokoningii. As regards root length, it was the maximum in treatments with T. hamatum (46.2%) and T. harzianum (45.1%) and minimum with those where T. koningii and T. pseudokoningii were applied. Contrarily, maximum reduction in root weight was observed in treatments where T. harzianum (37.8%) and T. viride (35.8%) were applied while T. koningii and T. pseudokoningii resulted in minimum decrease. All the Trichoderma species significantly caused reductions in the number of galls and eggs and reproductive factor of the nematode over control. Maximum reduction in numbers of galls and eggs were observed with T. viride (49 and 53%) followed by T. harzianum (46 and 53%) while the minimum reduction was recorded with T. pseudokoningii followed by T. atroviride. Likewise, T. viride caused the maximum reduction in reproductive factor of M. javanica (81%) followed by T. harzianum (78%) and T. asperellum (75%). On the other hand, the minimum reductions in reproductive factor were observed with T. pseudokoningii and T. koningii. 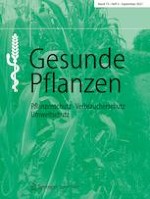