Bird conservation in the Carpathian Ecoregion in light of long-term land use trends and conservation responsibility | springerprofessional.de Skip to main content
SUCHE MENÜ 1 2 3 4

Land use change alters species' abundance and distributions by affecting habitat availability and quality. The decline of bird populations worldwide is of major concern, and habitat protection and restoration are primary conservation actions. However, conservation decisions largely consider only short-term habitat changes and species’ population dynamics in a given area. Disregarding long term modifications in species’ available habitat, and the role of a given population for a species’ global population may lead to misdirected conservation action. Our goal here was to combine the assessment of conservation responsibility, with that of century-long available habitat dynamics, in order to inform better conservation practice. We compiled available habitat data for 170 bird species in the Carpathian Region from 1860 to 2010 from historic maps and satellite data. We analyzed these species’ range distributions, IUCN extinction risk and population trends, and we identified 29 species of high conservation responsibility, and all of them were forest or and grassland specialists. Furthermore, we found major land use trends including cropland abandonment and increase in forests and grasslands that resulted in increases in potential habitat for the species for which the Carpathians have high conservation responsibility. The loss of row-crop agriculture, on the other hand, reduced habitat for species for which the Carpathians do not have high responsibility, and thus subsidizing agriculture may not be warranted from a conservation perspective. More broadly, many regions worldwide are undergoing rapid land use changes, and we suggest that these should be analyzed relative to a given regions’ conservation responsibility to see if there are opportunities for conservation, i.e., cases similar to the Carpathians, where conservation efforts ‘only’ have to foster current land use trends, and make them permanent, rather than to try to revert the loss of habitat.
Anzeige
Vorheriger Artikel Seasonality, crop type and crop phenology influence crop damage by wildlife herbivores in Africa and Asia
Nächster Artikel Contrasting impacts of highly invasive plant species on flower-visiting insect communities 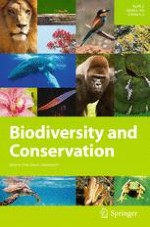 What affects the probability of biological invasions in Antarctica? Using an expanded conceptual framework to anticipate the risk of alien species expansion

Predicting the distribution of Encephalartos latifrons, a critically endangered cycad in South Africa

A comparison of methods for estimating plant population size