Recent studies show differences in population trends between groups of species occupying different habitats. In Czech birds, as well as in many other European countries, populations of forest species have increased, whereas populations of farmland species have declined. The aim of our study was to test whether population trends of particular species were related to finer bird-habitat associations within farmland and forest birds. We assessed bird-habitat associations using canonical correspondence analysis based on data from a 400 km long transect across the Czech Republic. We calculated population trends of 62 bird species using log-linear models based on data from a large-scale annual monitoring scheme, which covers the time series from 1982 to 2005. Within forest birds, species with a closer association with lowland broad-leaved forest have had more positive population trends, whereas species with a closer association with montane and coniferous forest revealed more negative population trends. We attribute these opposite trends to the gradual replacement of coniferous forests by deciduous ones, which took place in the Czech Republic during recent decades. Our analyses revealed a hump-shaped relationship within farmland birds, species most closely associated with farmland habitat revealing the most negative trends, whereas species with intermediate association to farmland habitat showed the most positive population trends. Such a pattern can be explained by the abandonment of previously cultivated areas followed by the spread of unmanaged meadows and scrubland. Changes in quantity or quality of preferred habitats may thus represent major drivers of observed bird population changes. 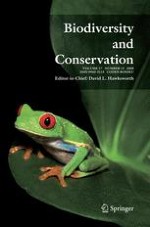 Ground nest predation might not be higher along edges of Neotropical forest remnants surrounded by pastures: evidence from the Brazilian Atlantic forest

Plant and arthropod communities in young oak stands: are they determined by site history?