Watching an ambiguous image leads to the bistability of its perception, that randomly oscillates between two possible interpretations. The relevant evolution of the neuron system is usually described with the equation of its “movement” over the nonuniform energy landscape under the action of the stochastic force, corresponding to noise perturbations. We utilize the alternative (and simpler) approach suggesting that the system is in the quasi-stationary state being described by the Arrhenius equation. The latter, in fact, determines the probability of the dynamical variation of the image being percepted (for example, the left Necker cube \(\leftrightarrow\) the right Necker cube) along one scenario or another. Probabilities of transitions from one perception to another are defined by barriers detaching corresponding wells of the energy landscape, and the relative value of the noise (analog of temperature) influencing this process. The mean noise value could be estimated from experimental data. The model predicts logarithmic dependence of the perception hysteresis width on the period of cyclic sweeping the parameter, controlling the perception (for instance, the contrast of the presented object). It agrees with the experiment and allows to estimate the time interval between two various perceptions. 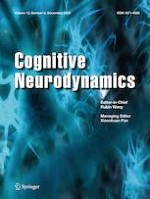