Grout injection into the horizontal fracture at the bed separation of an overburden is used as a surface subsidence control measure in coal-producing countries such as Poland, China, and Australia. However, the stiffness and distribution of the grouting mass in the post-injected overburden, as well as its effect on surface subsidence control, have not been investigated. To address these issues, two surface boreholes were drilled into the post-injected overburden above a longwall panel on the study site. It was found that the fly ash injected more than 7 months previously had become compacted. More than 90 % of the total fill was concentrated in the main injection section (MIS) of the overburden (thickness of 4.8–18.4 m). The MIS was located between the bottom of the injection borehole and the key stratum immediately above. Following injection, the central gob area received the maximum possible compression and served as the foundation of the support for the grout, allowing the grout to restrain the deformation of the strata above it, thus reducing surface subsidence. The results of this investigation may facilitate future injection design, thus improving the control of surface subsidence. 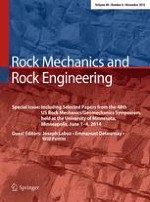 Rheological Model of DMFC Rockbolt and Rockmass in a Circular Tunnel